A Piedmontese in Palmyra
Scroll or drag to visit

Snapshots from a journey

Palmyra, 14 March 1751. Two Englishmen, James Dawkins and Robert Wood, come across the ruins of the ancient city during an expedition to the Levant. But theirs was no ordinary Grand Tour for the betterment of young aristocrats. There were explicit scientific reasons for the visit with the aim of documenting and collecting precise information about the location. The expedition could almost be defined as ‘archaeological’.

The Englishmen were accompanied by an architect and engineer from Piedmont called Giovanni Battista Borra. He was also an accomplished draughtsman and artist whose task it was to record ‘snapshots’ of the monuments and landscape. At the National Gallery of Scotland in Edinburgh hangs Gavin Hamilton’s large painting from 1758 “James Dawkins and Robert Wood Discovering the Ruins of Palmyra” in which all three members of the expedition are visible. 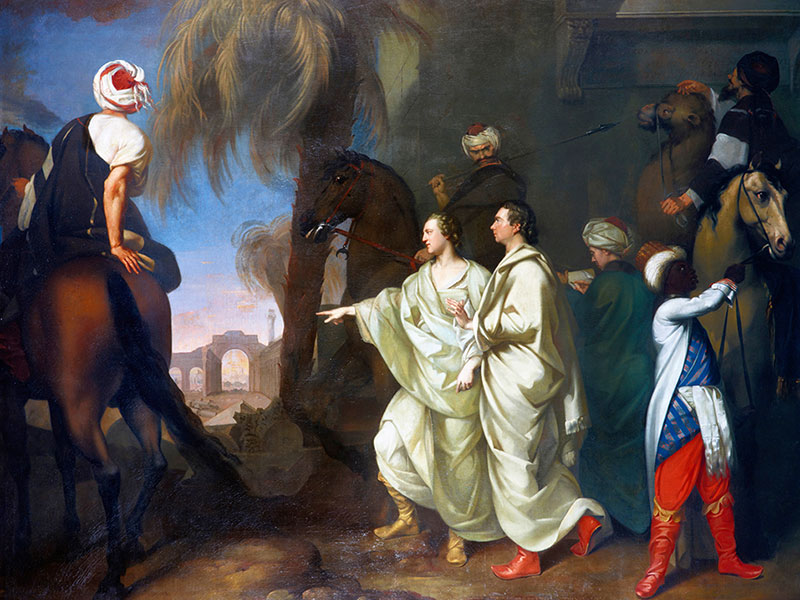 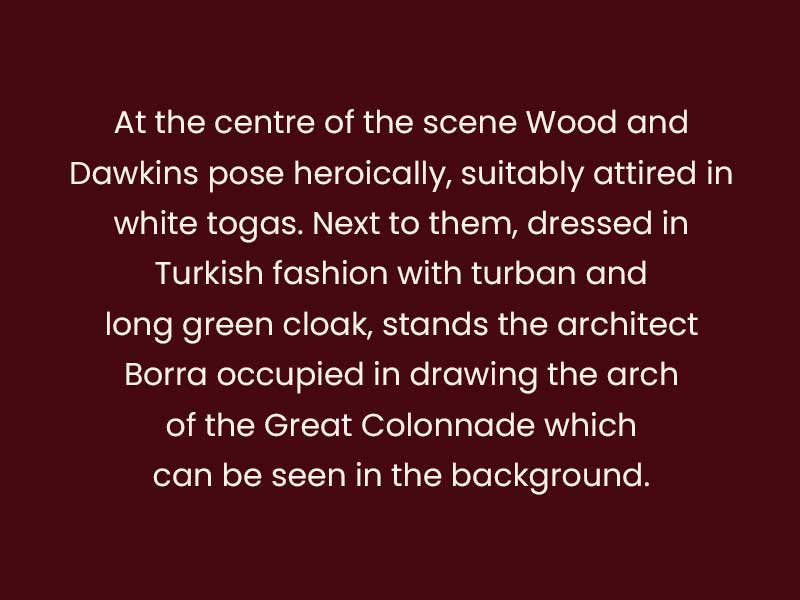 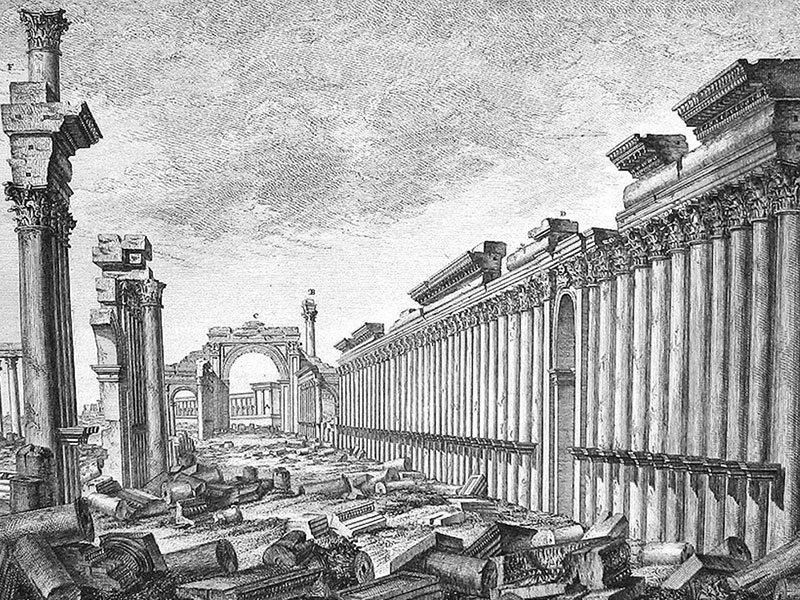 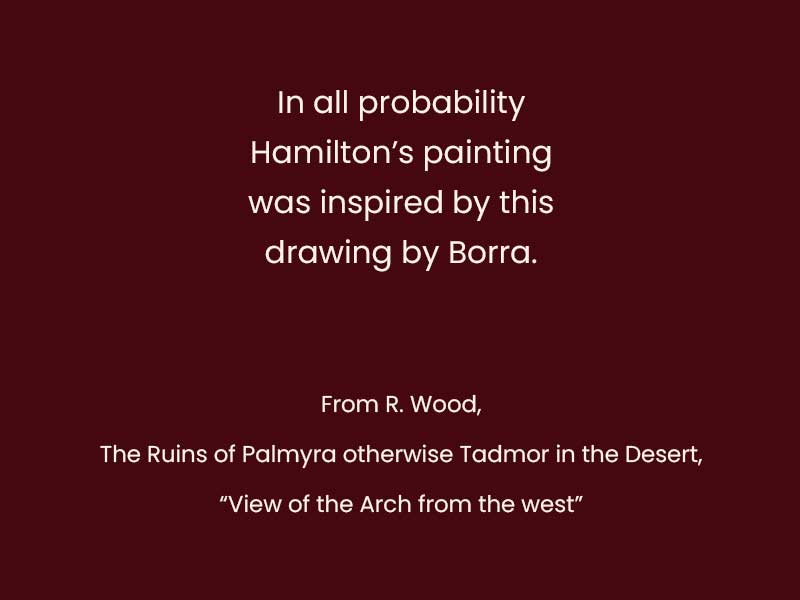 Dover, 3 August 1751. The ship Matilda docks on her return from the Levant. Now commences the second part of Borra’s task: to paint watercolours based on the drawings made during the journey and pass them the finest engravers of the time in London – Paul Fourdrinier, J.R.S. Muller and J.M. Muller Jnr – for subsequent publication in the volumes dedicated to the two most significant sites, Palmyra and Baalbek. Nowadays, digital era imagery perfection is within the grasp of everyone. But even for us, based on quite simple, but accurate, pencil drawings executed rapidly in the field, Borra’s paintings are nothing less than miraculous.

It beggars belief that in just two weeks at Palmyra the artist was capable of producing such a plethora of views, projections, plans, sections and architectural detail – both technical and decorative.

Thanks to the 57 engravings from Borra’s paintings which illustrated Wood’s volume from 1753 “The Ruins of Palmyra otherwise Tadmor in the Desert”, Europe finally discovers and sees Palmyra. 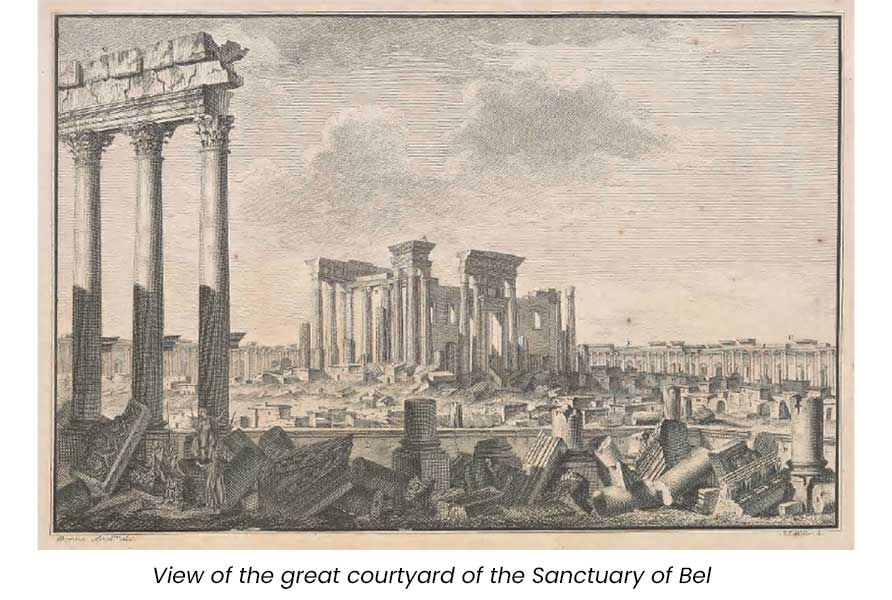 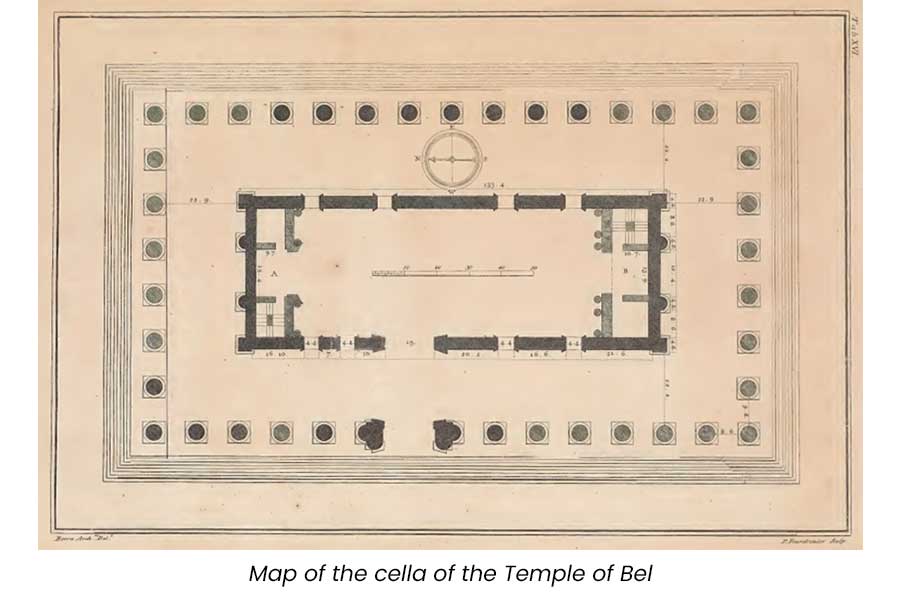 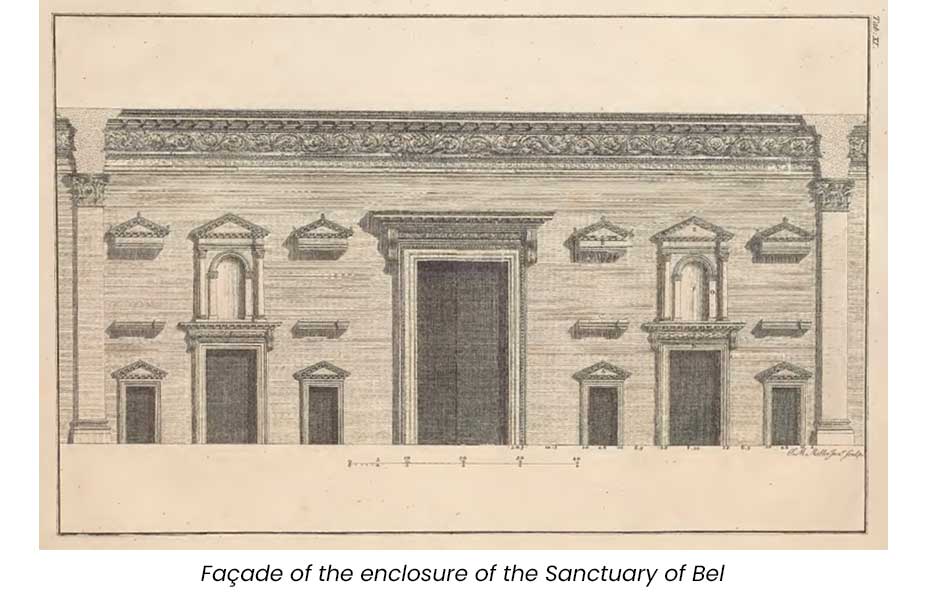 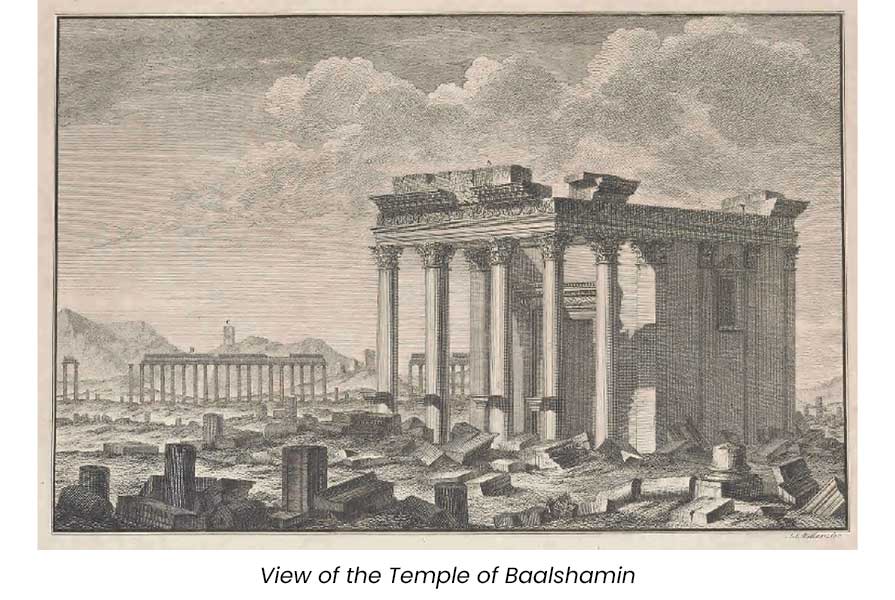 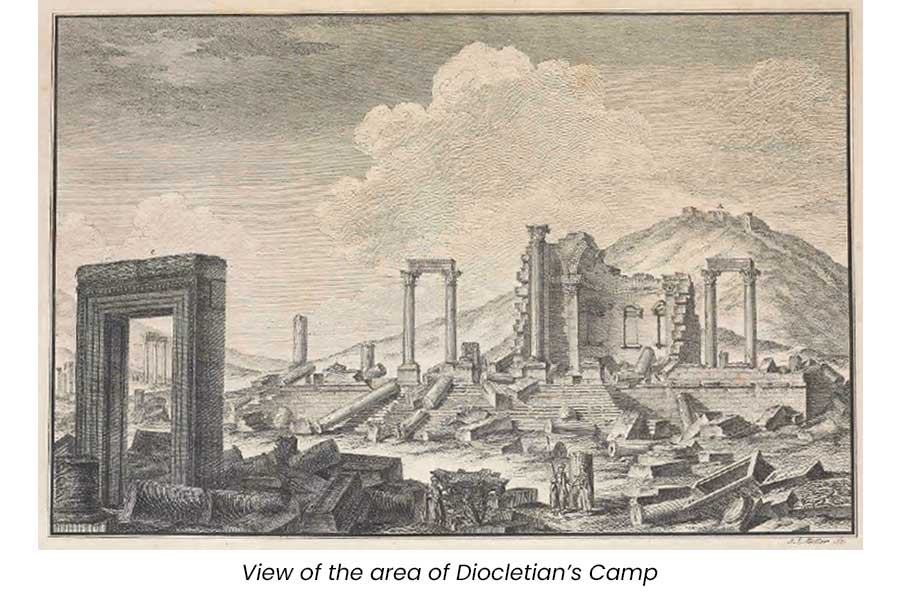 Borra’s fundamental contribution to the dissemination of the awareness of Palmyra’s architecture and art in Europe was not his only claim to fame. Over the course of his four-year stay in England he became a veritable architectural celebrity. He was much in demand in planning and designing gardens and residences for the British aristocracy and was instrumental in the contemporary development of a taste for Neoclassicism inspired by Antiquity.

The illustrations for Wood’s volume inspired other architects in their turn. In particular the images depicting the beautiful ceilings of the most intimate and sacred parts of the Temple of Bel became hugely influential and created a veritable fashion for ‘Palmyrene ceilings’. 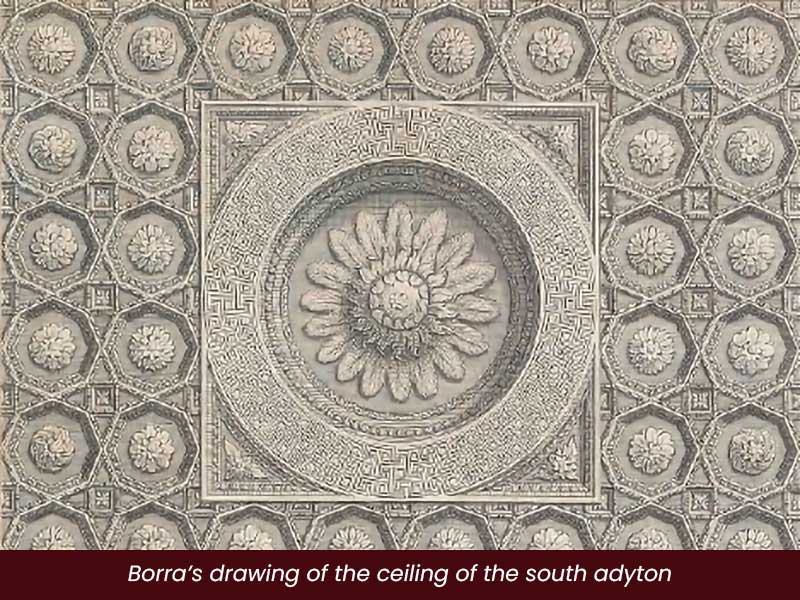 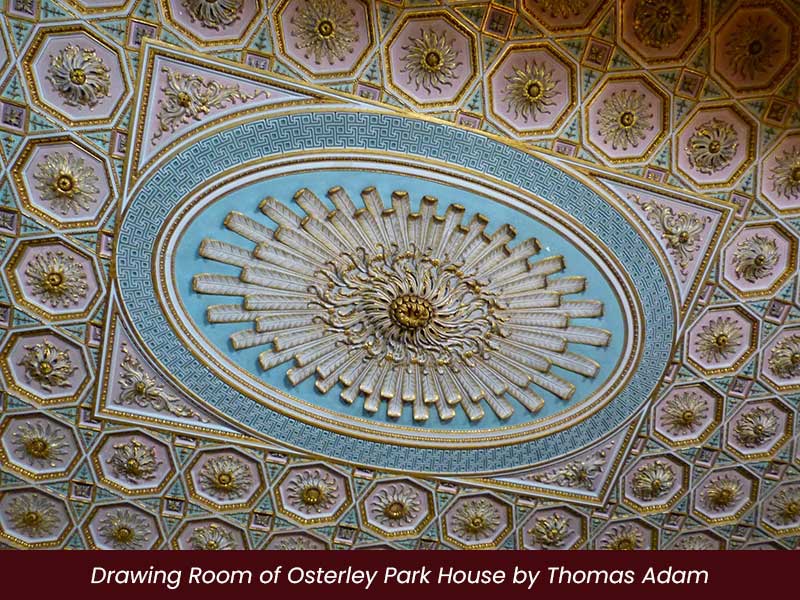 Thanks to Borra, traces of Palmyra may also be found in Piedmont. On his return from England in 1756 he was given the task of renovating Prince Luigi Vittorio of Savoia Carignano’s castle at Racconigi. The ceiling of the magnificent Hall of the Storie di Diana is inspired by that of a Palmyrene tomb: a dense texture of interwoven circles with a central rosette surrounds the refined stucco details in the central part of the ceiling featuring Apollo’s chariot. 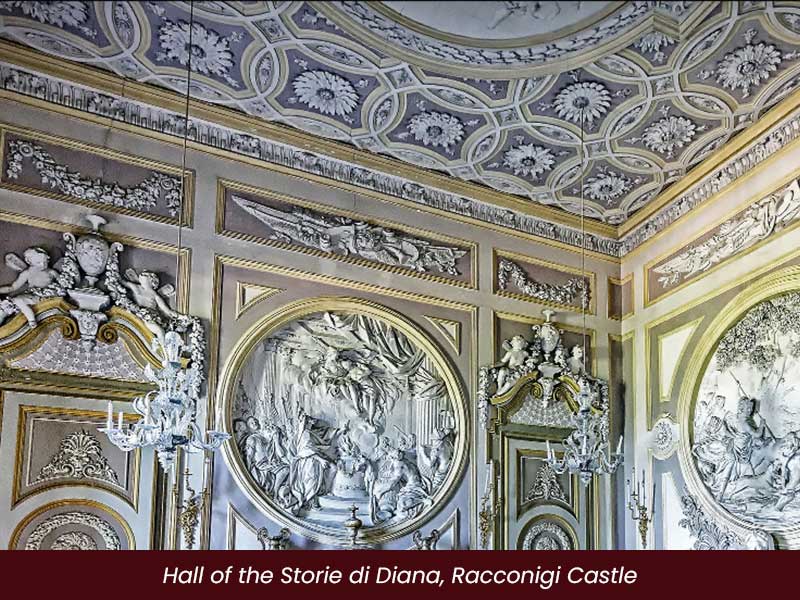 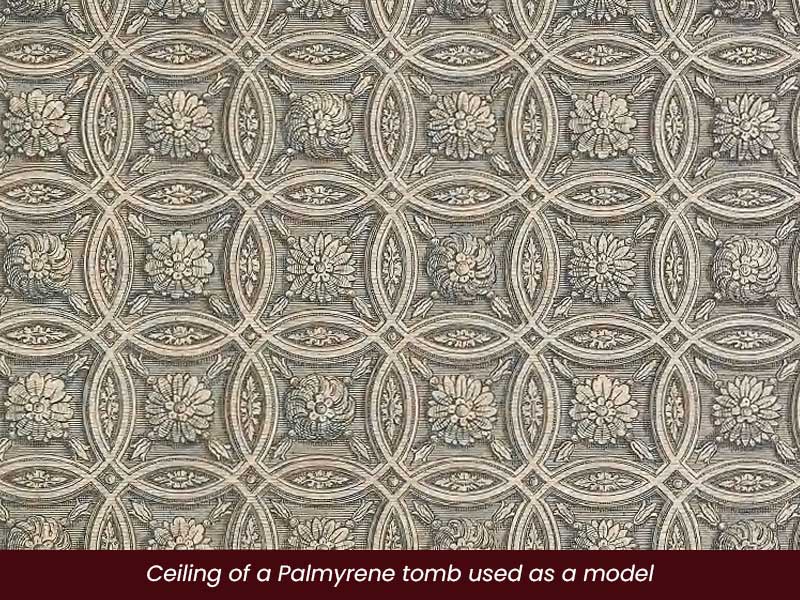 The pictorial evocations of Cassas

Many adventurous travellers journeyed to Palmyra in the wake of the sensational expedition in which Borra participated. One such was the Frenchman Louis-François Cassas who was appointed by the French ambassador in Constantinople to visit the Orient and draw monuments and landscapes. Over the course a month spent in Palmyra in 1785 he created a large quantity of drawings of the “superb ruins”, partially published in his 1799 volume Voyage pittoresque de la Syrie, de la Phénicie, de la Palestine et de la Basse-Égypte.

Subsequently Cassas made watercolours based on his drawings in which artistic license often gets the upper hand: individual (and real) monuments from Palmyra are integrated in the composition of imaginary landscapes. At the Musée des Beaux-Arts at Tours for example hangs a painting in which the tower tomb of Elahbel has been ‘transferred’ from the Valley of Tombs and situated in the section of the Great Colonnade which ends in the Monumental Arch. This Romantic re-evocation, in which a selection of Palmyra’s most significant (and unique) monuments have been assembled, is also populated by galloping horsemen and a caravan resting near a well. The whole projects an enchanting vision of Palmyra and the magnitude of its ruins in the immensity of the desert. 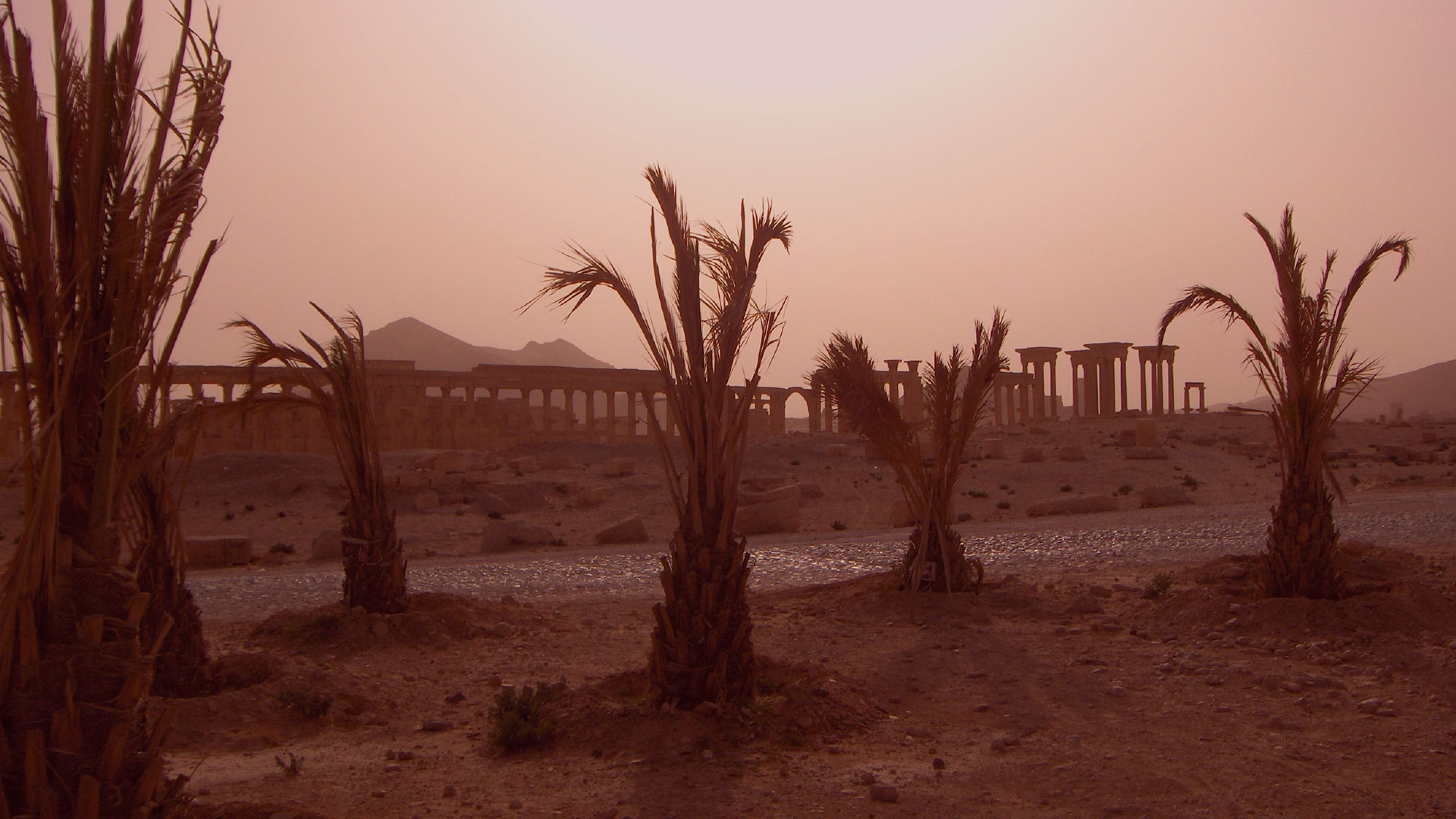