Palmyra between past, present and future
Scroll or drag to visit

A metropolis on the Silk Road

Palmyra is situated in an oasis of the Syrian desert steppe, halfway between the Mediterranean and the Euphrates. Its history can be traced back to the 2nd millennium B.C. when its name, Tadmor, appears in documents in the royal archives of the ancient city-state of Mari. In the same period we find the first signs of human occupation in the area where the great Sanctuary of Bel will be situated in the heart of the city. But only from the 3rd century B.C., in the Hellenistic period, does a true residential area with roads, houses and workshops come into existence.

The large-scale development of Palmyra takes place during the Imperial Roman period, and between the 1st and 3rd centuries A.D. the residential zone becomes a true metropolis featuring imposing public-, civil- and religious buildings. This transformation comes about thanks to the wealth and prosperity of the lords of Palmyra who gradually seized control of a large portion of the trade between East and West: from China, India and Arabia and the new powerhouse that is Rome. 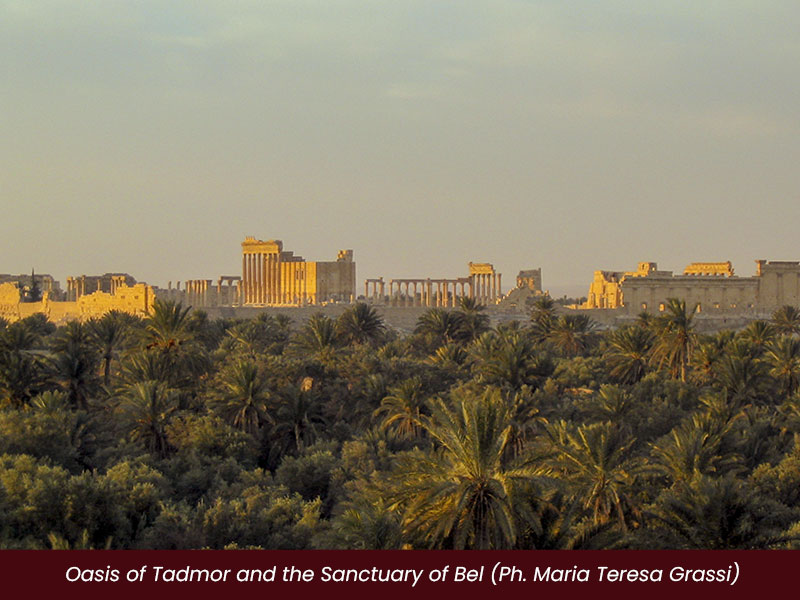 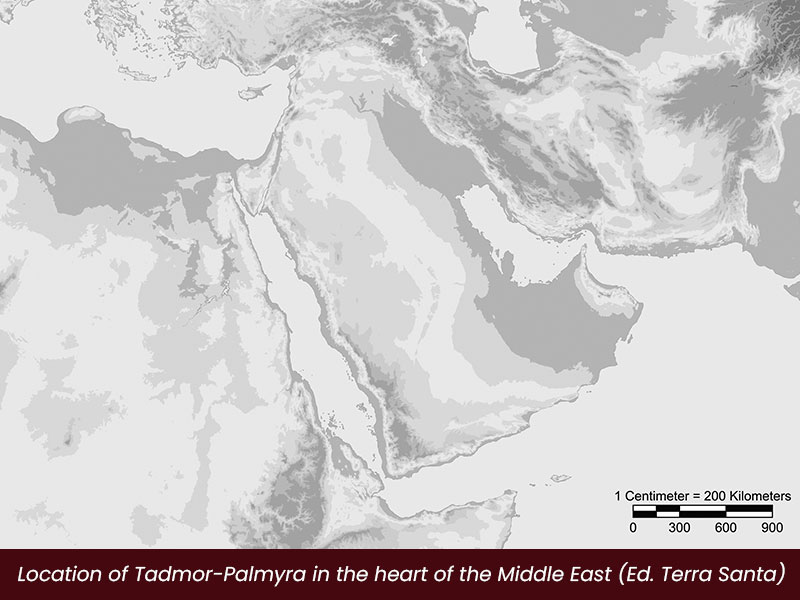 The urban landscape in the Roman period

The principal events in the transformation of the urban fabric concern the sacred areas, with the construction of monumental stone temples in the western mould: first and foremost the Temple of Bel – ‘house of the Palmyrene Gods’, but also the temples of Baalshamin, Nabu and Allat. Then the construction of the Agora, civic centre of Palmyra, and the neighbouring theatre. The progressive layout of a network of colonnaded roads was intended to regulate the urban landscape and confer decorum upon it. Along them were situated the sumptuous residences of the Palmyrene élite, whilst the ‘dwellings for eternity’, large family tombs featuring peculiar architecture, are to be found in the necropolises surrounding the city. 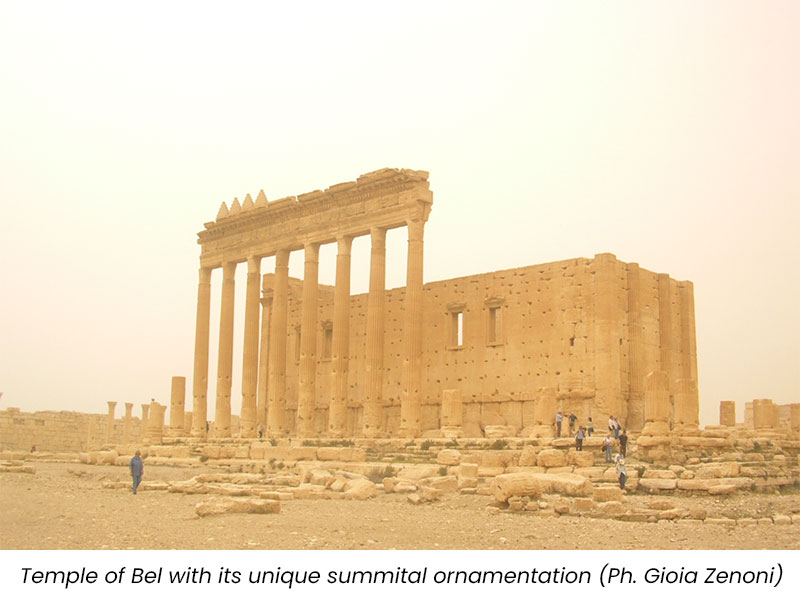 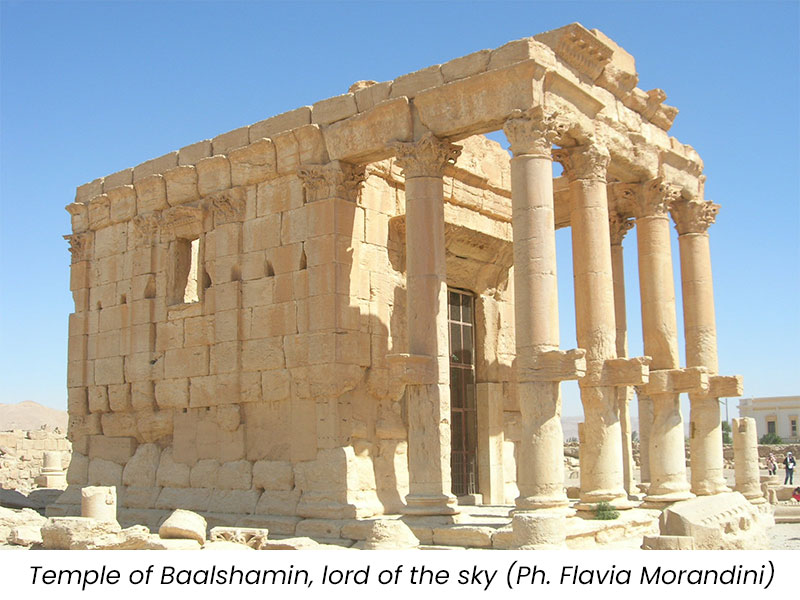 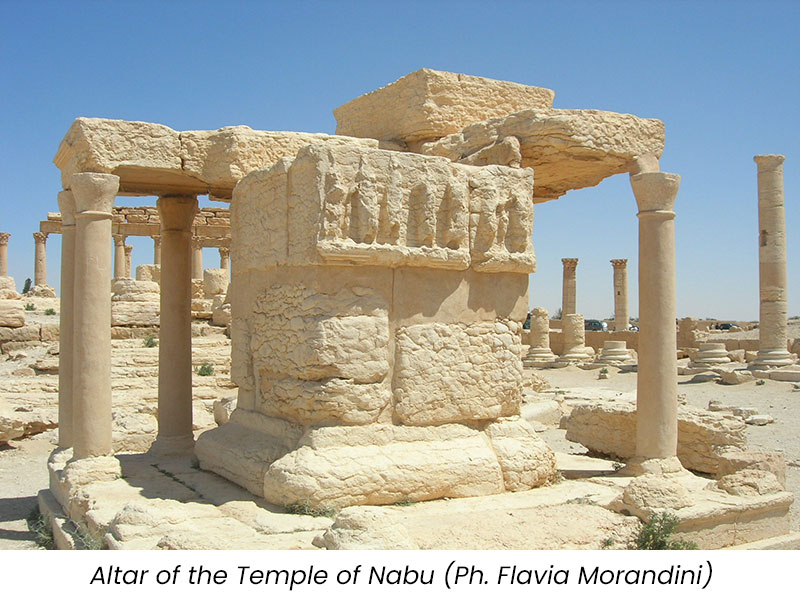 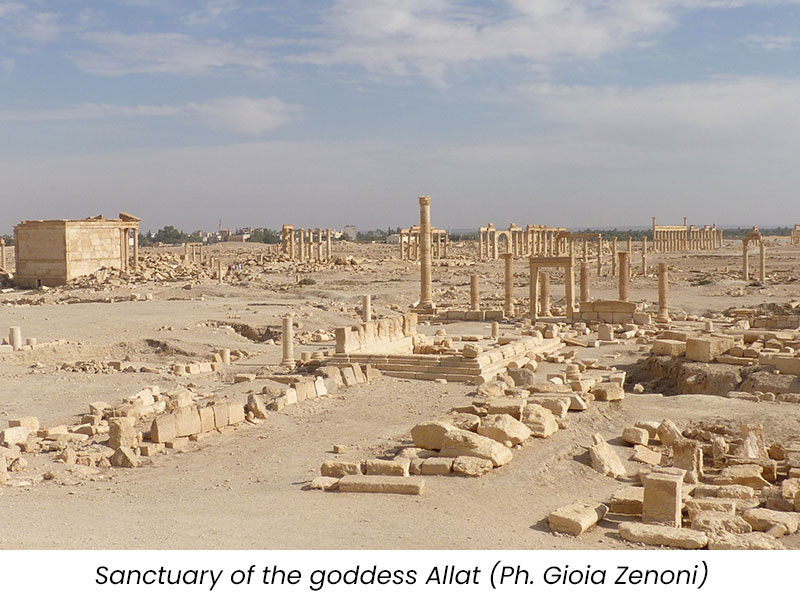 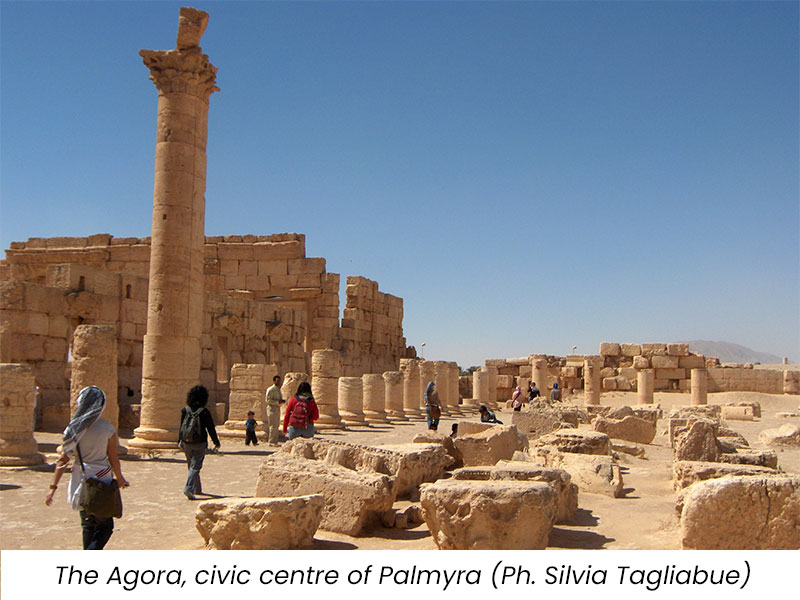 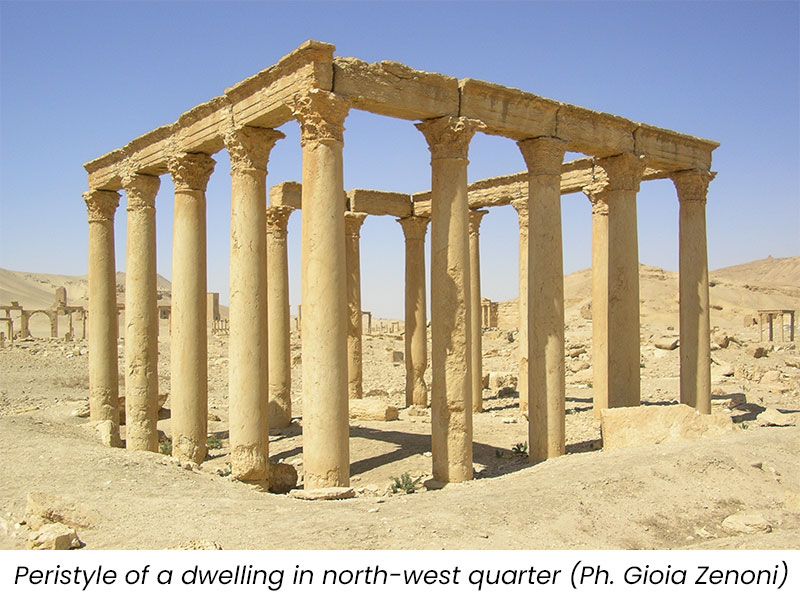 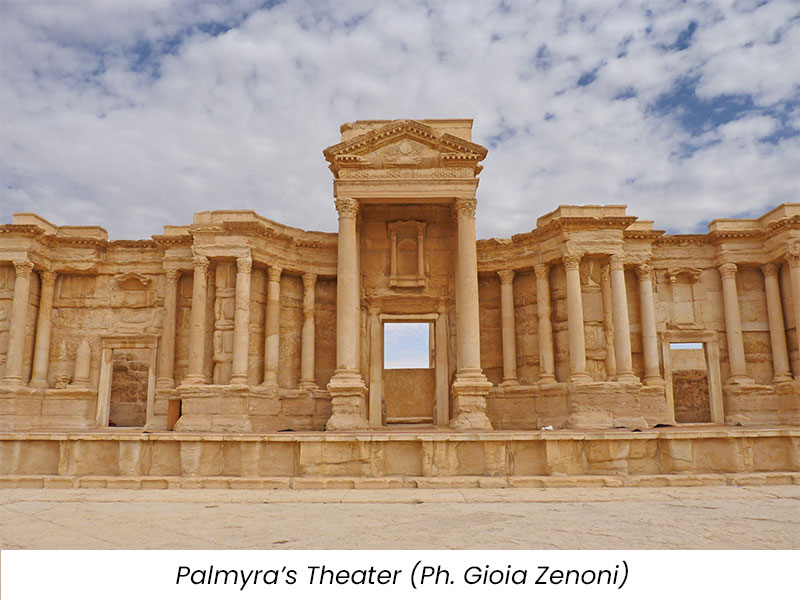 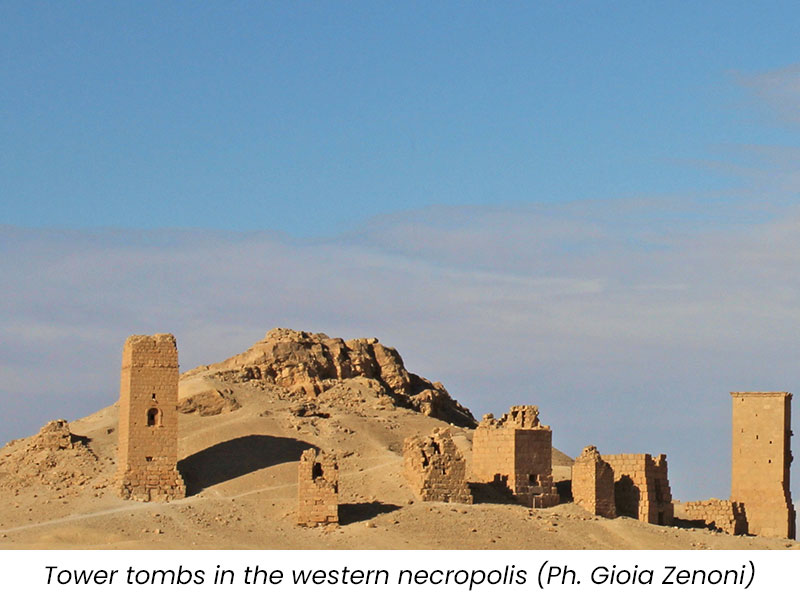 The great and powerful Palmyra played an important part in the crisis which overwhelmed the Roman Empire in the middle of the 3rd century. Firstly when the Palmyrene general Odaenathus succeeded in repelling the Sassanid threat, and secondly – after his assassination – when his widow Zenobia dared to challenge Rome and its emperor Aurelian. The legendary queen’s defeat – an epic which has inspired artists right up to the present day – heralded a setback in the city’s evolution.

Palmyra’s history does not end here, even though the glory of the preceding centuries is not destined to return. Its role in the defensive system of the Empire is evident in Diocletian’s Camp, the extensive military complex which develpoed at the western end of the urban area towards the end of the 3rd century. Furthermore, the monumental Christian basilicas constructed from the 4th century (and in use for at least 500 years) bear testament to the continuing vitality of the city and the presence of a flourishing Christian community.

Even in the era of the Umayyad caliphate between the 7th and 8th centuries, Palmyra remains significant as shown by the mosque, suq (market) and a number of dwellings and workshops.

Starting from the 9th century the ancient city is gradually abandoned whilst a modest town takes root in the fortified area of the Sanctuary of Bel, converted into a mosque. 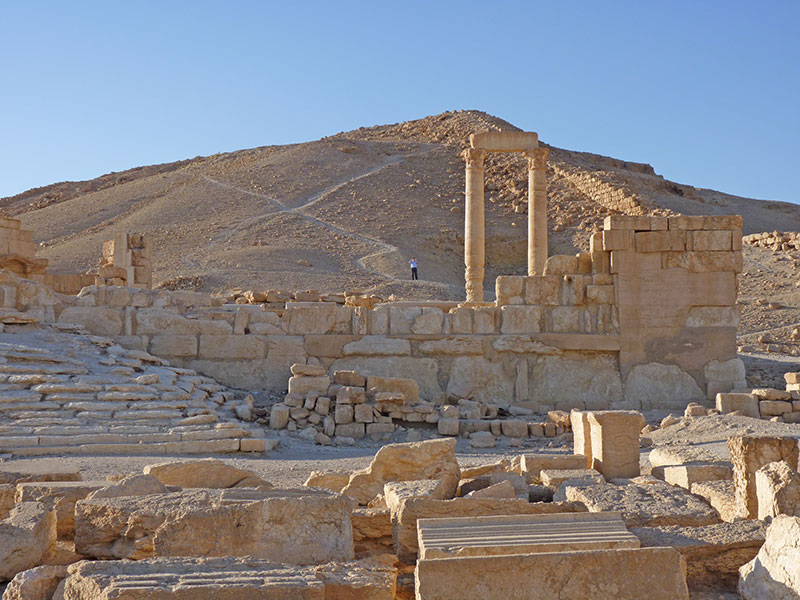 The rediscovery of Palmyra

From the 18th century Palmyra enters the western collective consciousness as the epitome of places exotic, fascinating, perilous and intriguing. Accounts of journeys and of mysterious symbols in the ruins are widely read and never ceased to exert a particular fascination on the public which never waned, not even in more recent times.

The publication in 1753 of Robert Wood’s “The Ruins of Palmyra otherwise Tadmor in the Desert” with its illustrations by the Piedmontese architect Giovanni Battista Borra was a watershed moment in the history of the ‘discovery’ of Palmyra by the Europeans.

R. Wood, The ruins of Palmyra otherwise Tadmor in the Desert, plate 26: View of the arch from the east

A miscellaneous multitude of travellers, scholars and adventurers visited and recounted Palmyra between the 18th and 19th centuries. A similarly varied assembly of scientific expeditions investigated the site in the 20th century, with Germans, French, Poles, Russians, Danes, Swiss, Japanese, Austrians, Norwegians, Italians and Americans flanking Syrian archaeologists at the site. The latter’s extensive and generous welcome to international collaboration is yet further testimony to Palmyra’s status as a cultural meeting place and melting-pot. Just as in ancient times, numerous voices, languages and cultures congregate at a site that which has deservedly been a UNESCO World Heritage Site since 1980. 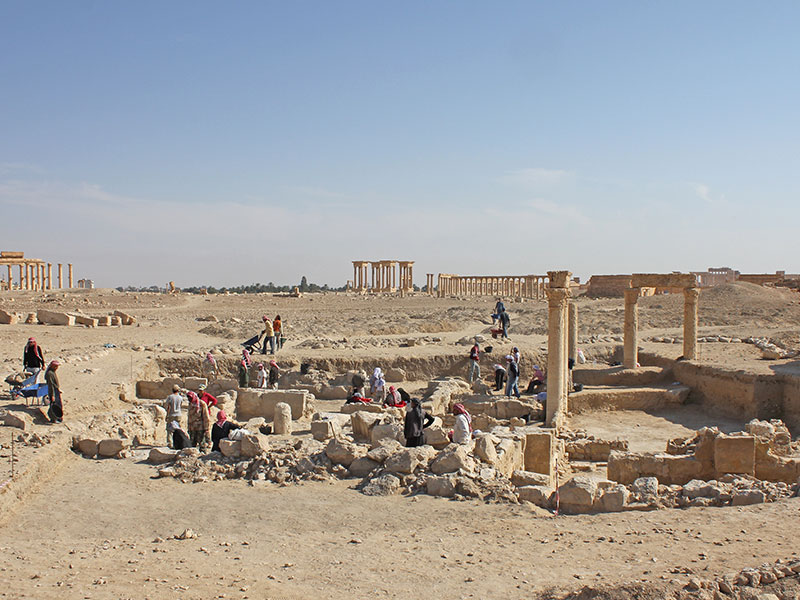 In 2011 war ripped this idyllic scenario asunder, initially by halting the activities of the international archaeological digs and by blocking the tourism which constituted the economic life blood of the local communities, leading to the depopulation of the modern city of Tadmor.

Thanks to its ability to exploit modern means of communication and social media, Da’esh, which occupied Palmyra from May 2015 to March 2016 (and also in December of that year), was able to disseminate images of the atrocities it committed there, including the brutal murder of Khaled al- As‘ad, Director of Antiquites of Palmyra from 1963 to 2003. Further footage showed the demolition of the temples of Bel and Baalshamin, the destruction of some tower tombs, a large part of the Monumental Arch on the Great Colonnade and consistent damage to the Tetrapylon and the Theatre.

Despite the untold destruction, pillaging and vandalism at the site, studies of- and for Palmyra have not ceased. As we wait for the war to end, many new initiatives have been launched with a view to sharing the site’s incalculable cultural heritage and projecting it into the future. This will be the great challenge for future generations of Palmyra scholars. 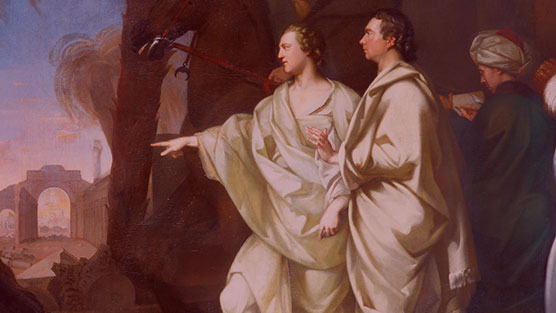 A Piedmontese in Palmyra