Zenobia
Scroll or drag to visit

The rise of Zenobia

By the mid-3rd century A.D. the Roman Empire was in crisis, under attack by enemies on all its borders and wracked by internal power struggles. The situation was particularly critical in the province of Syria, continuously invaded and sacked by the Sasanian King Shapur I.

In this context of unrest Palmyra took on a key political role: Septimius Odaenathus, described in sources as ‘commander of Palmyra’, was given the task of defending the eastern border by Emperor Gallienus who conferred the highest military rank upon him.

Odaenathus’ successes in the battlefield were however destined to precipitate his downfall: in 267 he was assassinated together with his son Hairan. Those responsible remain anonymous and their motives unclear, but it is certain that authority and titles passed nominally into the hands of his young son Vaballathus, whilst the real power was exercised by the child’s month Zenobia, Odaenathus’ second wife.

Under Zenobia Palmyra began to extend its dominion over vast tracts of the Orient outside Syria, reaching as far as Arabia, Egypt and Asia Minor. In an obvious attempt to gain parity with the Roman emperors, in 272 Vaballathus and Zenobia proclaimed themselves Sebastoi (Augusti in Latin) and coins from the imperial mint were engraved accordingly with the new title. 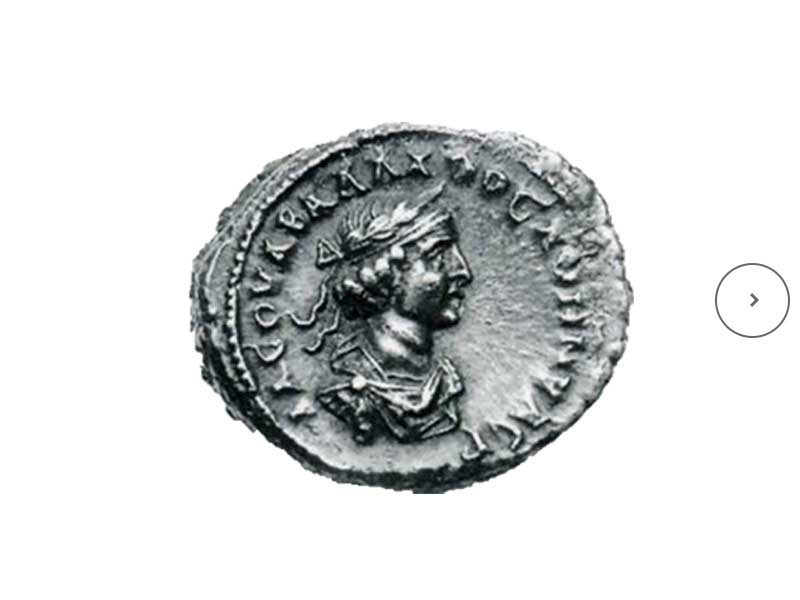 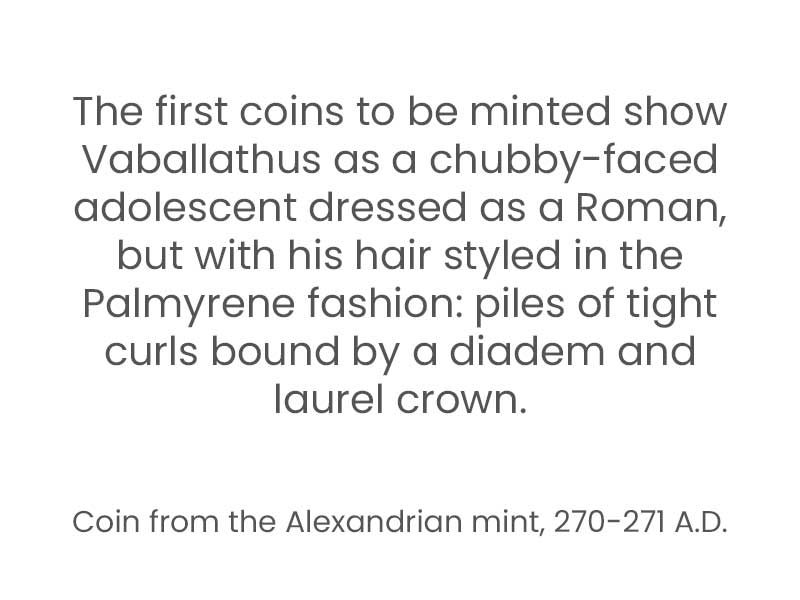 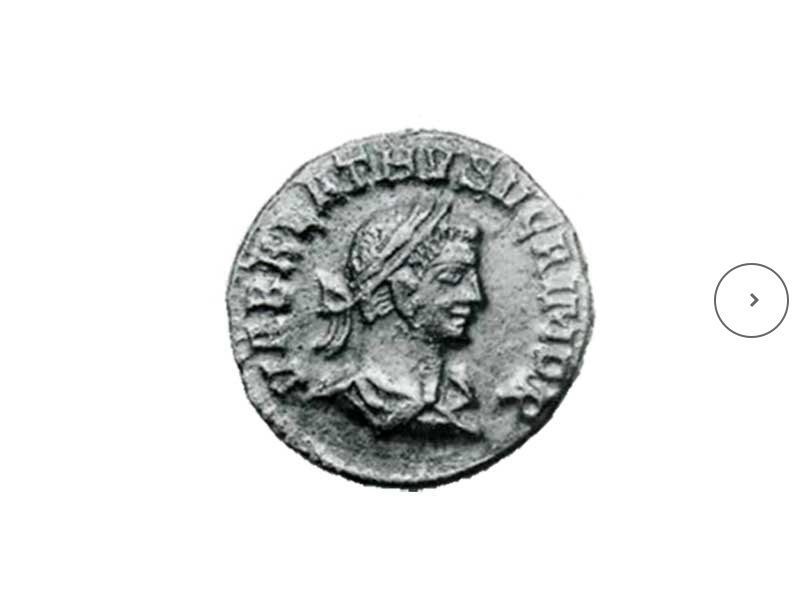 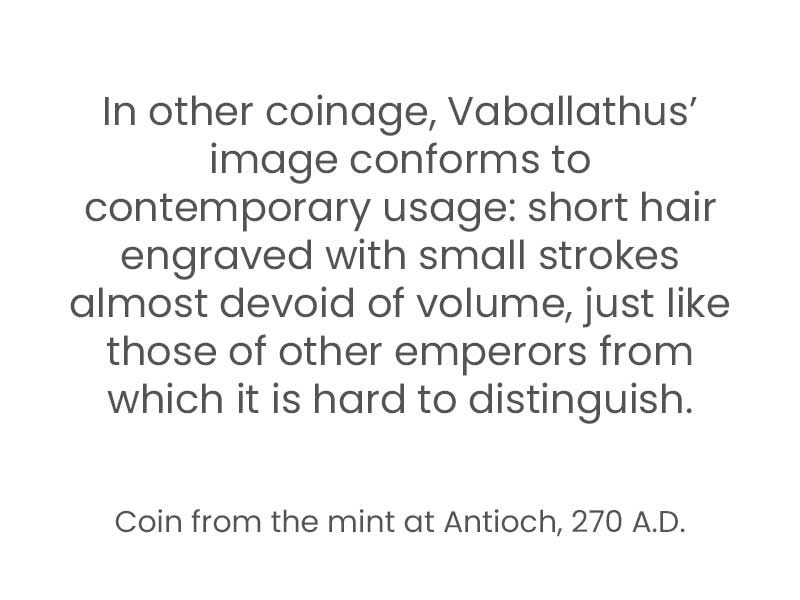 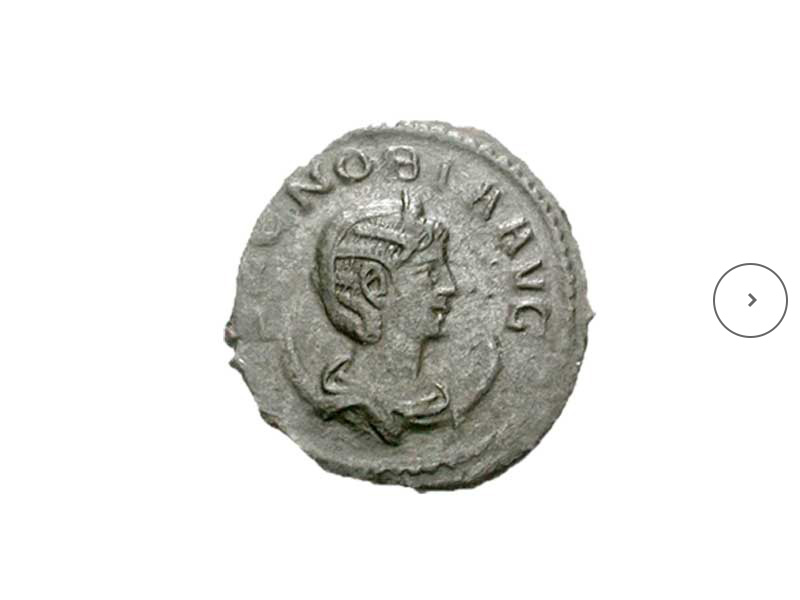 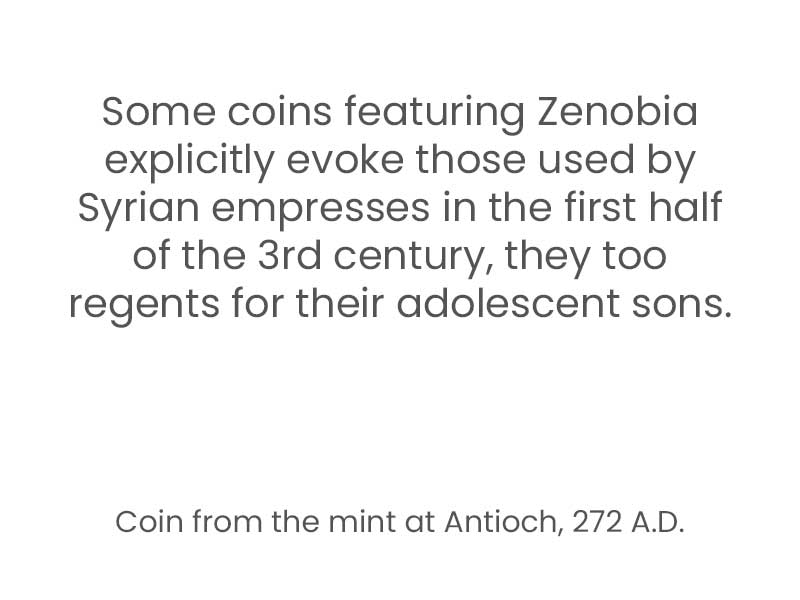 The clash with Aurelian

What exactly was Zenobia trying to achieve? Create an oriental empire? In the words of the eminent French historian Paul Veyne, the division of the Roman Empire into regions each with eastern and western emperors was a bold idea, but certainly not a utopian one.

Or did Zenobia perhaps have more ambitious plans? Some scholars sustain that, in the manner of many other usurpers in the 3rd century A.D., her true aim was to conquer the entire empire. Whatever her plans, they were abruptly stymied by the vigorous reaction of the new emperor: in 272 Aurelian launched a punitive expedition in the Orient and, after having defeated the Palmyrenes at Antioch and Emesa, he chased them to Palmyra which was duly besieged and conquered. 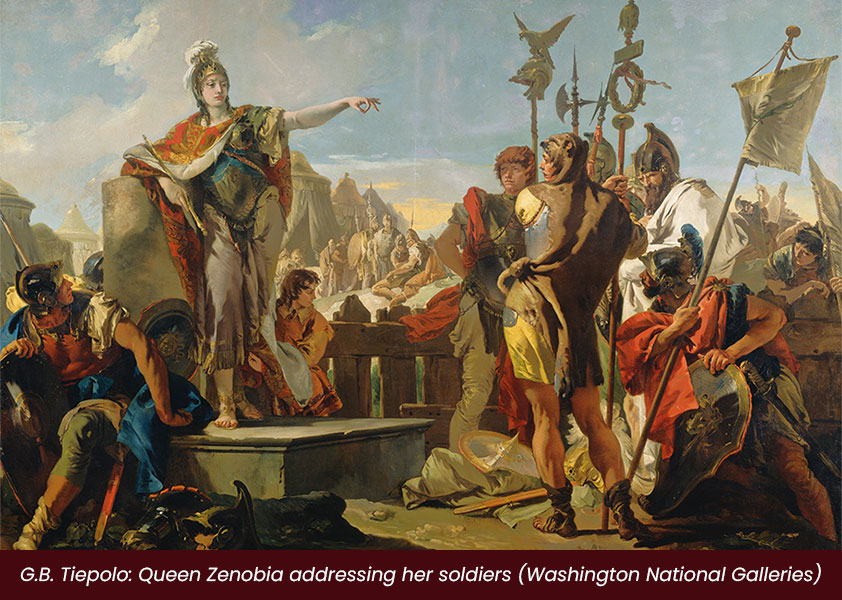 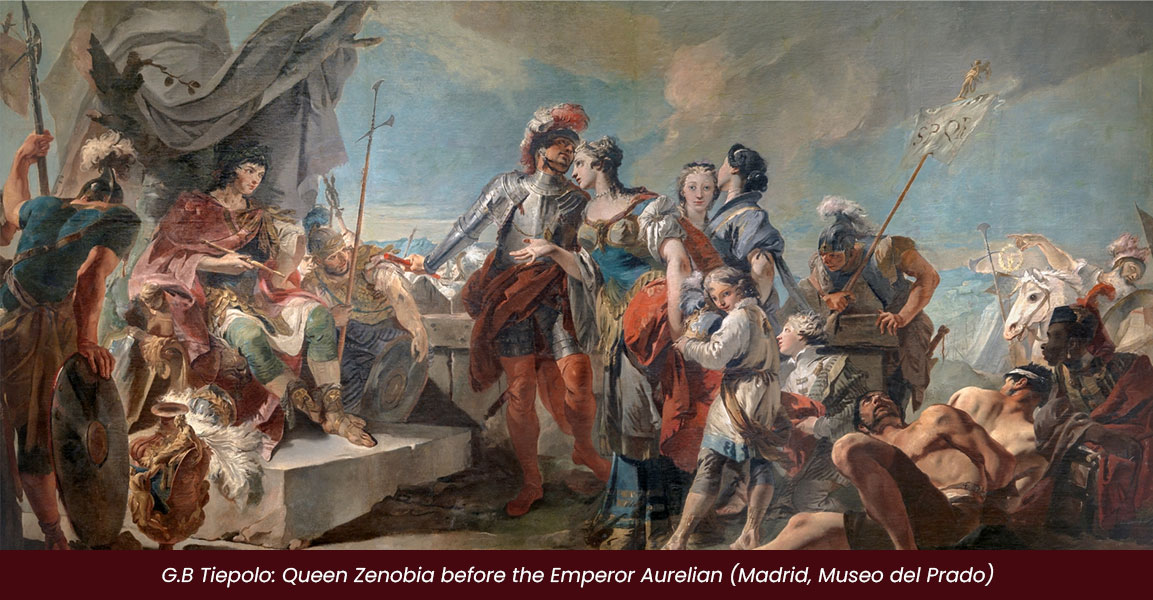 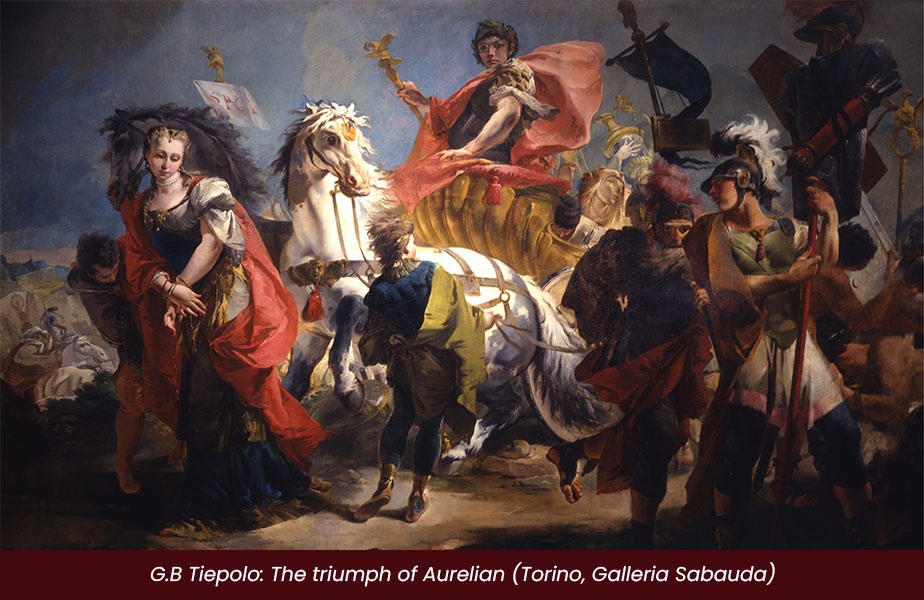 We do not know what Zenobia’s fate was. Early sources record an attempt to flee across the Euphrates, but it is not known whether she was actually captured and died during her transfer to Rome. Others suggest she was taken to Rome to be paraded in chains of gold in Aurelian’s triumphal procession and ended her days exiled to a villa in Tivoli, not far from Villa Adriana.

Even though Zenobia left the stage, her Palmyra rebelled once more – in 272. Only having quelled this second uprising did Aurelian return to the west.

Despite the glory that her reputation continued to confer upon Palmyra in the centuries to come, there are very few traces of her at the site itself. One is an inscription beneath the shelf which bore her statue on a column in the Great Colonnade. Honoured as queen and an illustrious and pious woman, it was erected in her honour in 271 by the two leading generals in the Palmyrene army: Septimius Zabda and Septimius Zabbai. 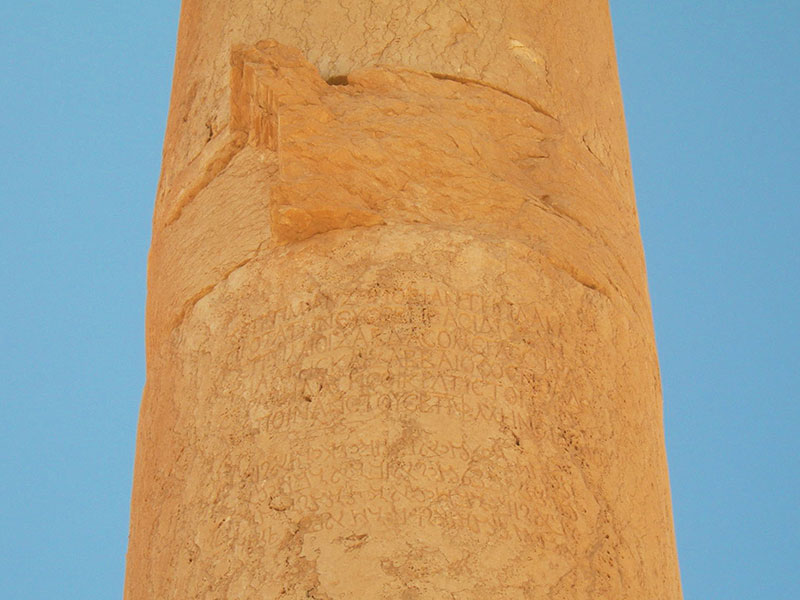 The same can be said of her portrait. Her true likeness, dour and haughty, is to be found on very few coins only.

Whilst an earlier set of coins for Septimia Zenobia Sebasté (Augusta) dating from 272 B.C. feature a generic image of female imperialism, referencing in particular that of Julia Mamaea, a second group of coins, minted in Alexandria, bear a truer likeness. 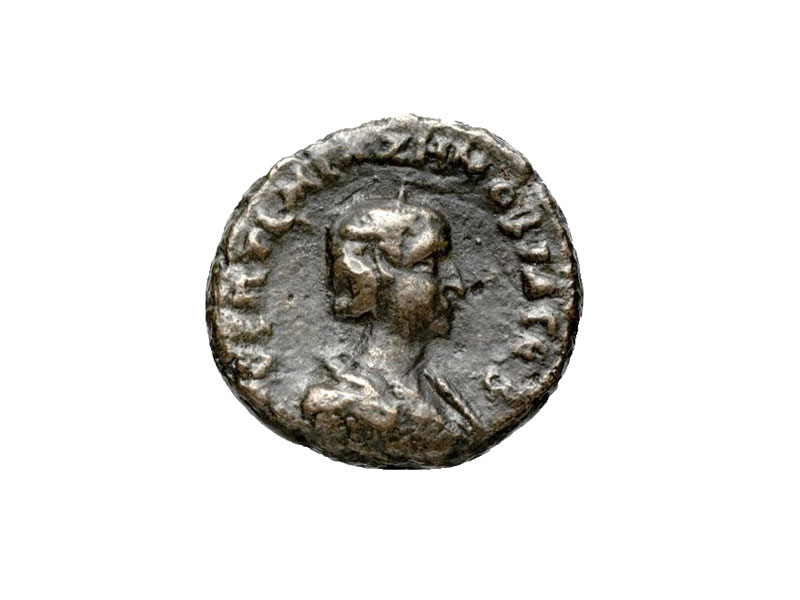 Zenobia’s bust on a coin minted in Alexandria

Despite the coin being in a poor state of conservation leaving the image somewhat unfocussed, we can distinguish her real face: a vertical and lofty brow, aquiline nose, pronounced cheek bones and stern expression. In truth, the latter trait is characteristic of all imperial female portraits in the 3rd century, as is the hairstyle with wavy hair gathered in a bun at the nape of the neck and decorated with a diadem. So was there a reason for evoking a more ancient generic style?

Julia Mamaea was the last of a dynasty of Syrian women who enjoyed considerable influence in Rome in the first decades of the 3rd century. Their ancestor was Julia Domna, the emperor Septimius Severus’ wife and mother of Caracalla, followed by the daughters of her sister Julia Mesa, Julia Soemias (mother of Elagabalus) and the above-mentioned Julia Mamaea, Severus Alexander’s mother.

It is hard not to imagine that these Syrian women belonging to a powerful dynasty of prince-priests from Emesa, mothers of adolescent emperors and thus true ‘empresses’ of Rome, represented ideals to which Zenobia aspired.

From history to legend

The historical documentary evidence relating to Zenobia is also fragmentary – and often ‘imaginary’ – leaving ample scope for the development of numerous interpretations of her life which have come into being and contributed to the legends and myths which surround her.

Though the biography featured in the Historia Augusta emphasising her physical and moral prowess is certainly more rhetoric than fact, it still exerted a powerful influence on the reconstructions and re-imaginings of Zenobia’s life which have been created since medieval time: prose and poetry, theatre and music, drawings and paintings, tapestries and sculpture. The myth of a brave queen, chaste and beautiful, has inspired works by Petrarca, Boccaccio, Chaucer, Michelangelo, Calderon de la Barca, il Genovesino, Albinoni, Tiepolo, Paisiello and Rossini – just to mention the names of more famous artists.

Such transformations as Zenobia’s personality has undergone over the centuries are not merely attributable to artistic license but are also closely tied to specific socio-political circumstances.

Thus in the 19th century she is recast as a romantic heroine; Orientalist trends in painting evoke her as a prisoner deep in dreamy meditation clad in exotic and fabrics and magnificent jewels; in the 20th century she is reincarnated as a symbol of resistance for indigenous people against colonial oppression. 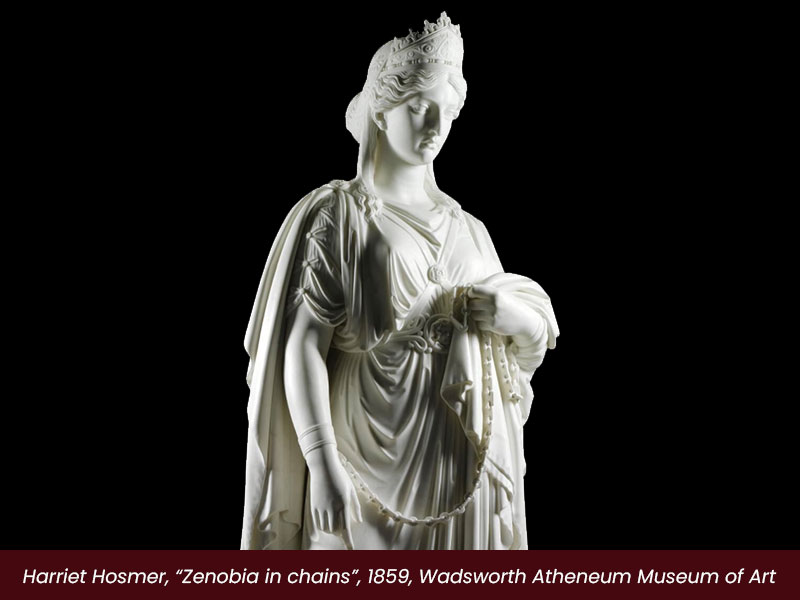 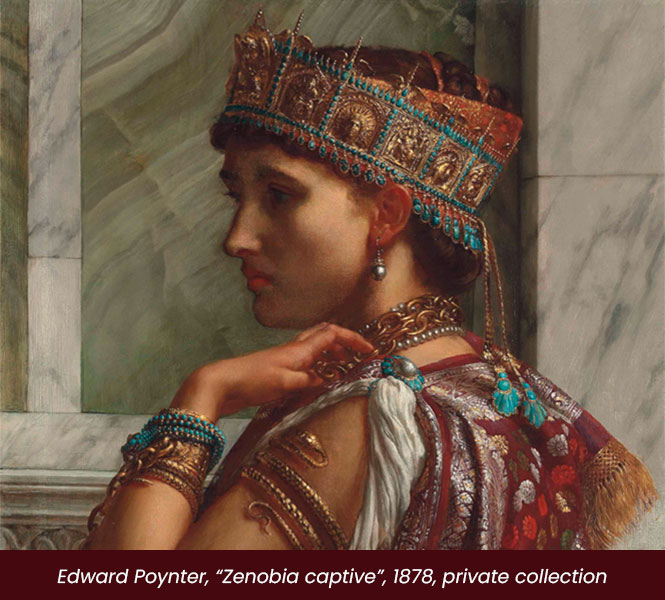 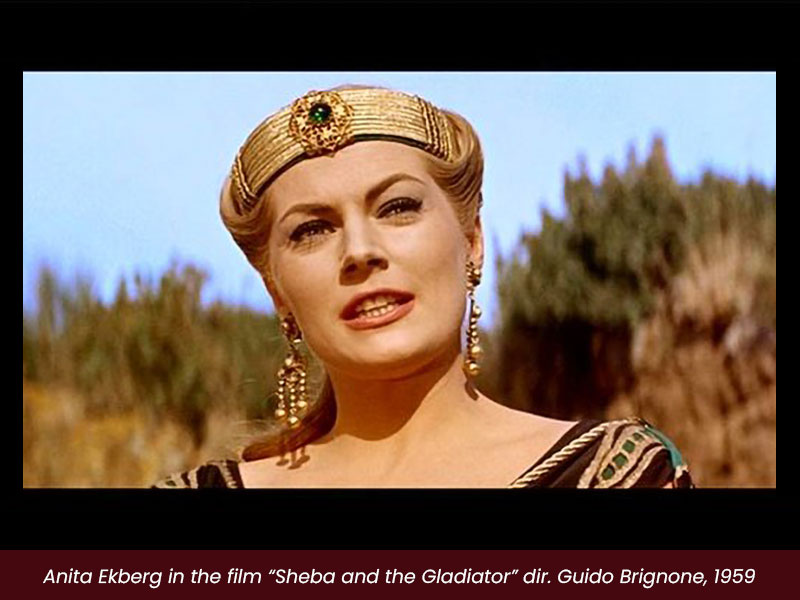 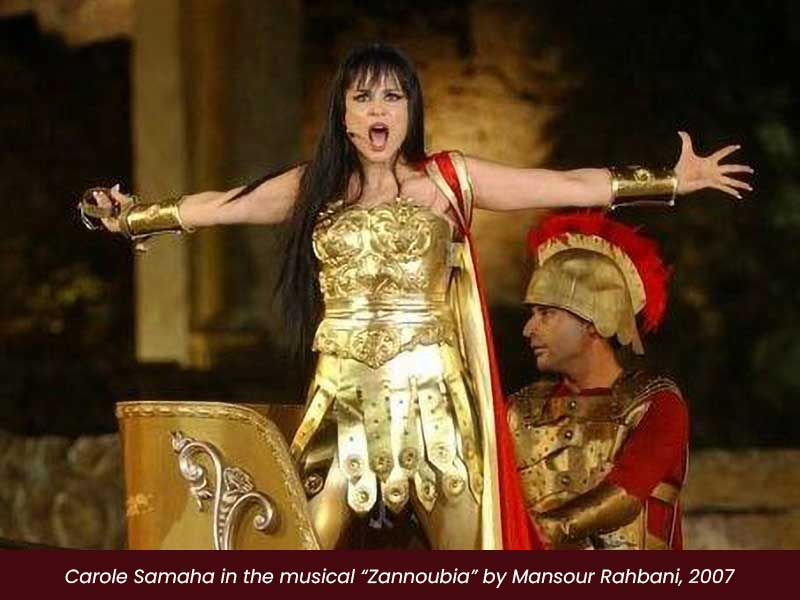 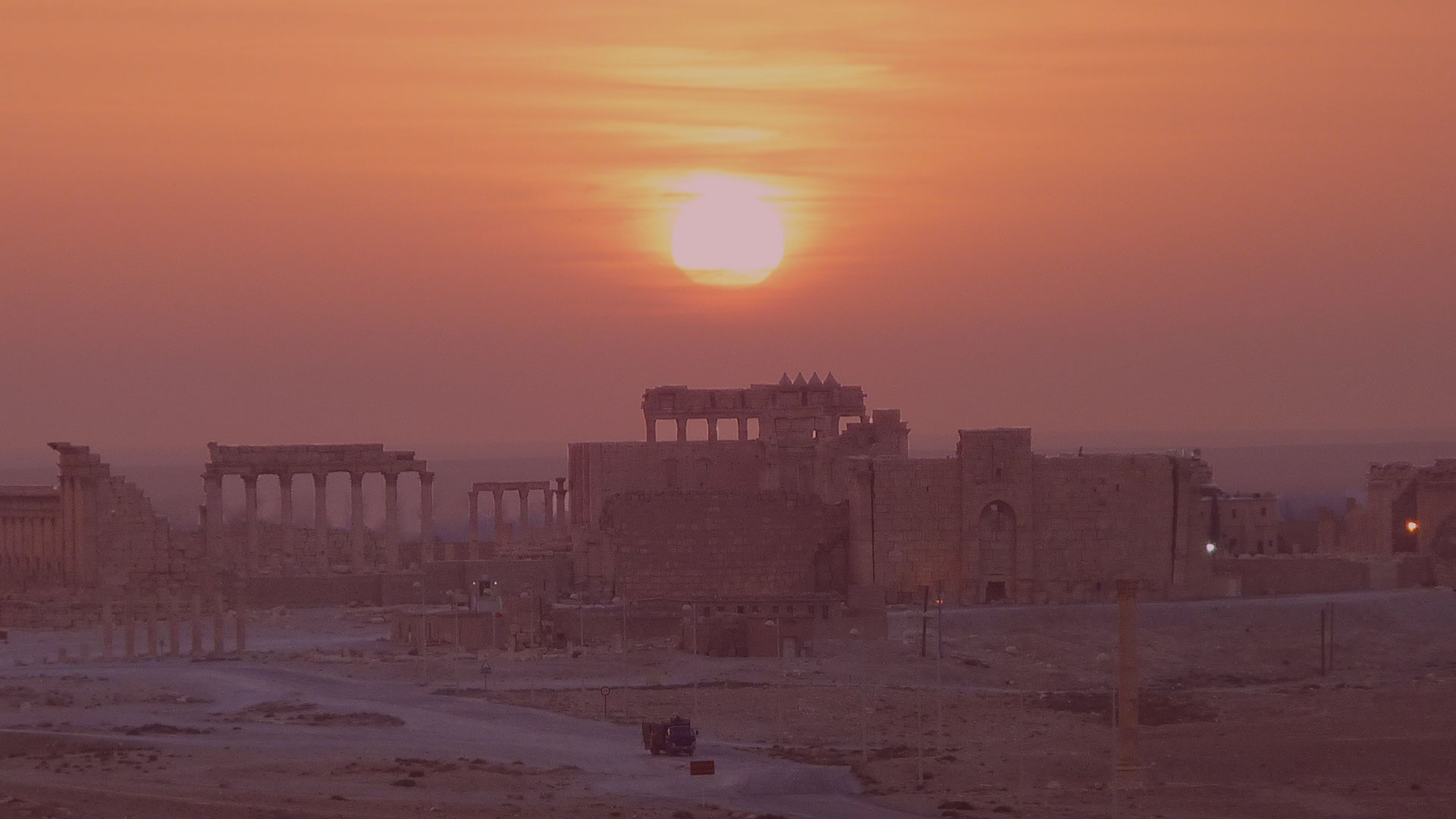 Two Zeus and other gods